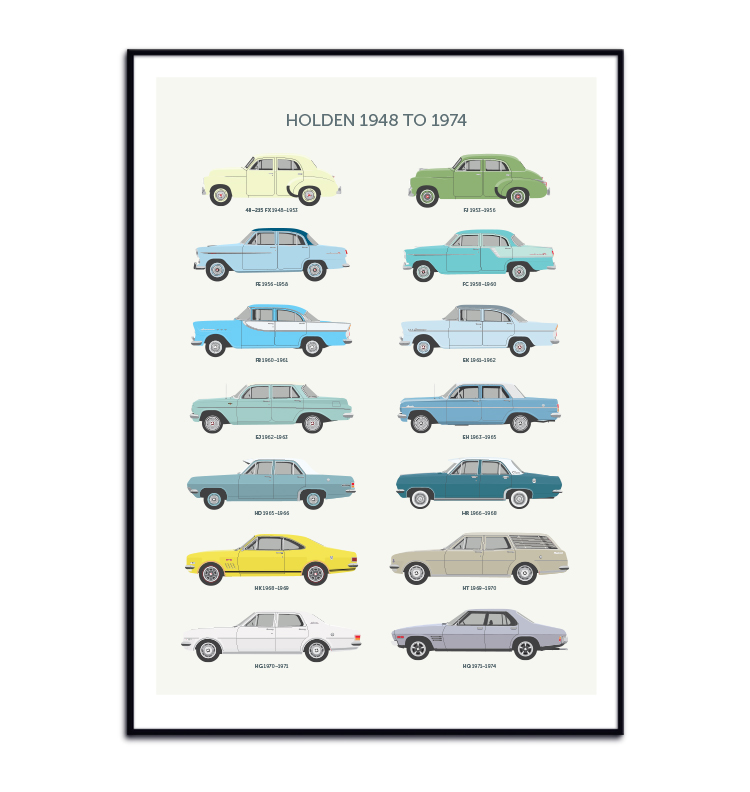 All the best vintage Holden cars from 1948 to 1974. The original Holden FX came out in 1948 and was the first fully Australian assembled car built for the Australian domestic market. It was followed by the facelift Holden FJ in 1953. Although this styling was a little dated by 1953 it was a huge hit and quickly became ‘the’ iconic Australian car. 1956 saw a complete makeover for Holden with the new FE (in style at least, not so much mechanically) taking it’s cues from the 1955 Chevrolet, although slightly more humble than it’s American big brother. The General Motors influence continued, moving the 1958 Holden FC along with the 56 Chevy, adding a little more chrome on the side. For me, the 1960 FB Holden was a coming of age, having dipped it’s toe in the Chevrolet waters, this was the flying forward one-and-a-half somersaults, pike. Chevrolet had done this four years earlier with the outstanding Bel-Air but for Australians, and us New Zealanders over the ditch, this was Hollywood glam. The Holden EK followed in 61 with a minor styling update. With the Holden EJ in 1962, Holden left the 50’s behind with a truly modern car. This was a real grown-up car with higher trim levels and many more accessories – regarded today as one of Holden’s finest models. 1963 saw the tweaked Holden EH hit the market and the big news in 63 was the all new ‘red’ motor to replace the ‘old grey’. One of my favourite models is the HD, launched in 1965, however, it wasn’t well received by all – it may have been a step to far with it’s pointed fin front for the conservative Antipodean market of the mid-sixties. Tellingly, a new model appeared the following year. A softened-off front end and other refinements were aimed at addressing some of the criticism. Then in 1968 came the Mighty Holden HK, big in styling and big in power, this was the start of a great era for Holden with the HT and HG that followed, essentially the same car with upgrades along the way. I have a Holden HG Premier and for me, this is as good as Holdens get. In 1971 Holden launch the HQ, a beautiful car that sold well and evolved through the 1970s … and then came the Commodore – but that’s another story.